In June 2017, during a team building event, I spoke with a colleague about traveling to Africa. We shared our ideas why we would love to travel there and what should we do and see. Since I held a few programming courses back in Serbia one of my wishes was to do the same thing somewhere in Africa. My colleague said he would like to visit Ethiopia, see how they live and get a taste of their culture, but didn’t have anything against visiting some other country. During the talk we figured out a way to achieve our shared goal, but with a little twist. We won’t go to Ethiopia, but some 5000 km south-west, to Namibia. Luckily for us, he has a very close friend working in Windhoek (capital city), and one of his jobs was managing P.A.Y. center in Namibia. I’ll explain later what P.A.Y. is exactly and how it works. For now, just to give you an idea, there I was supposed to teach university kids NodeJS for ten days and give them a comprehensive introduction so they can continue working on their own.

Fast forward seven months, I’m on the train to Frankfurt. From there I need to catch my flight to Windhoek. It was my first 10+ hour flight within 1 hour difference between time zones, and I wasn’t jetlagged the morning after. My colleague was already in Windhoek where he was coaching P.A.Y. staff before the upcoming semester. I never planned to visit Etosha pan, Caprivi, Namib desert or something; my sole purpose was to teach and wander around the city.

A bit of history

Namibia is a vast country, twice the size of Germany, and it has just 2.2 Million inhabitants. They gained independence in 1990 after being under Germany and Republic of South Africa for more than 100 years. 18% of the country is turned to a National Park where you can see very diverse flora and fauna. Namibia is in possession of the oldest deserts in the world - Namib desert. They are enclosed by Angola, Zambia, Zimbabwe, Botswana, and the Republic of South Africa. Unfortunately, Namibia is a country with the highest GINI index (wealth difference between poor and rich).

The first impression is, of course, sunny and beautiful weather, 33 degrees Celsius, 30 more than in Berlin. Instant happiness occurs because I didn’t see a blue sky for a month or so. The driver that is waiting for me is so welcoming like we know each other for years. To my surprise, his English is pretty good. A few moments later I found that English is country’s official language, but since I was too busy beforehand, I didn’t even check the basic facts online. Drive from airport to Windhoek is about 45 minutes on the left side of the road, which after a long flight give me an impression that we are driving in the wrong direction. So, the fact that I didn’t know - driving on the left side of the road. Beside the road, I’ve seen a few baboons chilling in the sun and eating something from the ground. That was funny for me because up until that moment; I’ve only seen wild animals in the Zoo.

Windhoek is the biggest city in Namibia and also capital. It has around 350 thousand citizens. The place where I was staying is called Ausspannplatz, and it has German name for a reason. Namibia was German colony before, so it is common to see some marks from that time. One of the most famous landmarks is a German church. 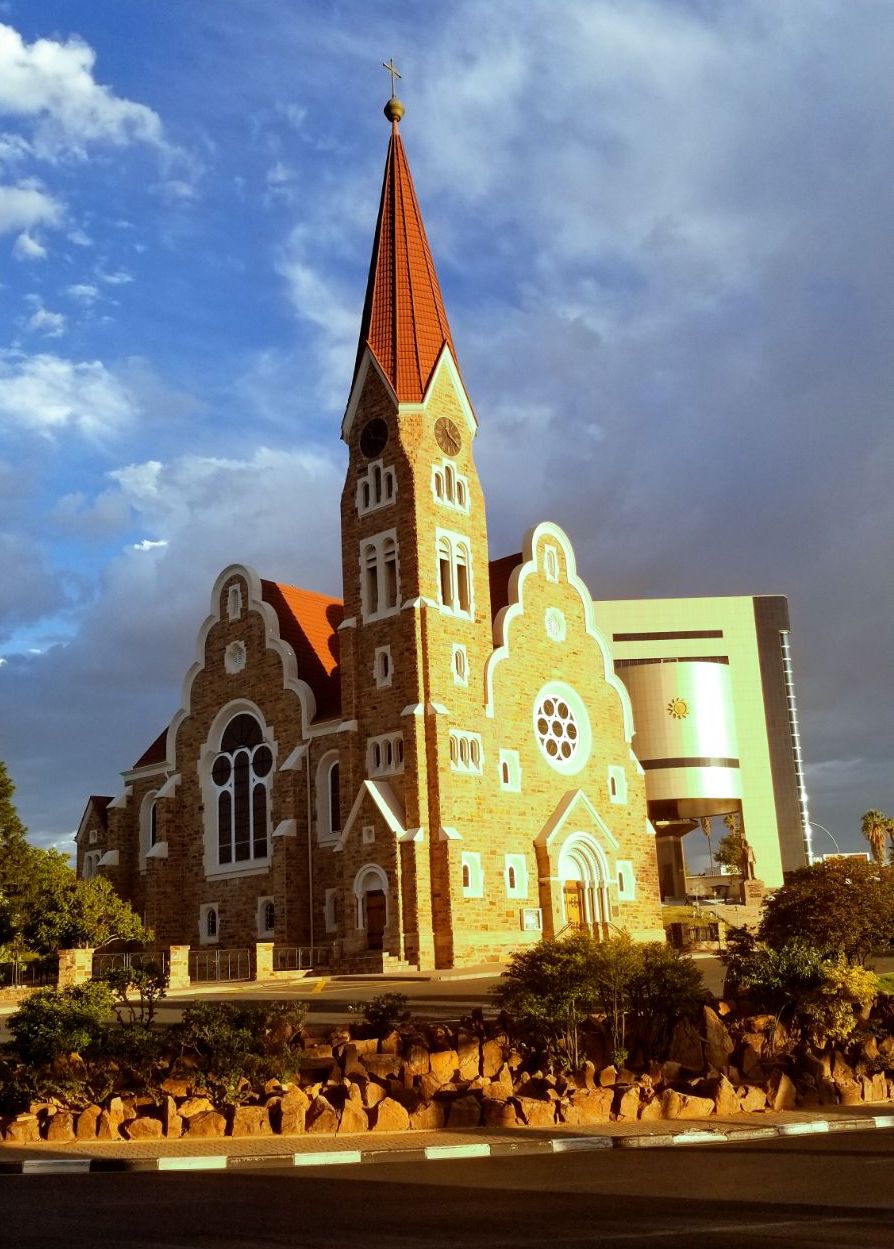 Main transportation is a car and majority of people use taxis which in Windhoek operate like public transport. Taxi goes from point A to B picking passengers along the way and charges every passenger fixed price. Whenever someone enters the vehicle, he/she greets the other passengers and chit-chat begins. On one occasion I was helping a driver to top-up his phone while he was driving. In that situations, I noticed how people are warm, honest and humble which I think it’s sporadic to see nowadays in the western world. Here is one more story to support this: I was in the cab, and when I reached my destination driver didn’t have any small bills to give me change, so I entered the local tailor store and asked a worker there to exchange money. He didn’t have enough, but he gave me his money (which was enough to cover taxi cost) and told me to return money to him later. That man saw me for the first time and yet he borrowed me money without hesitation or any guarantee that he will see me again. Of course, I changed money as soon as possible and returned it to him. 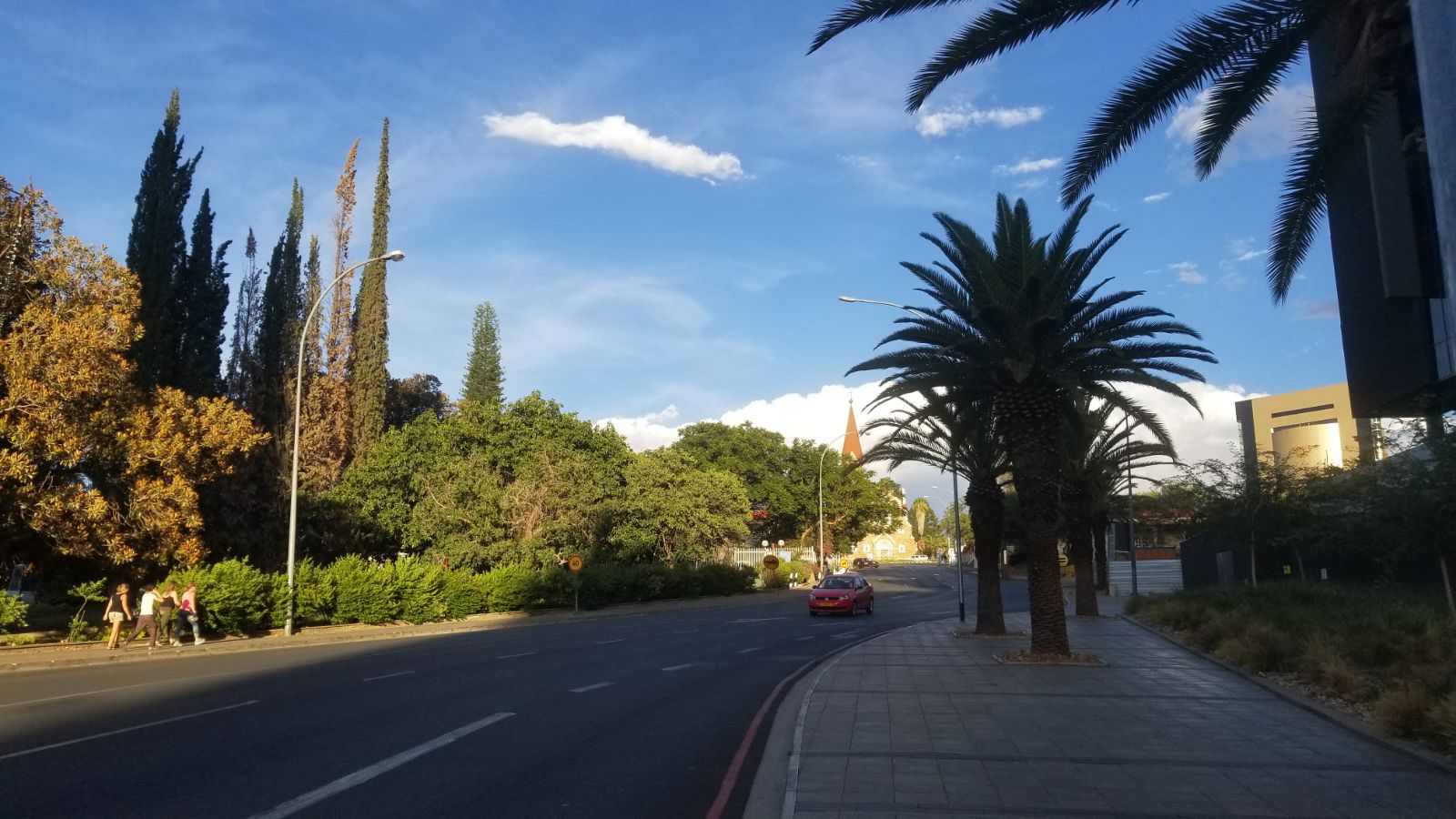 The sad part of the history is still visible on the streets of Windhoek. It is very easy too distinct rich from poor neighborhoods. In rich areas, you can see tall walls usually with wire on top and big houses and yards within. Streets are clean and asphalted. On the other hands, poor neighborhoods have a lot of small houses where roads are rarely or even not covered with concrete. Children and people were on the streets, and most of them share their rooms with multiple siblings or even whole family which takes away all the privacy. Speaking with young ones, I noticed that most of them need that privacy and peace so they can at least concentrate on their education.

During the apartheid, all people of color were moved from various parts of the city to a new location. They called the place Katutura, and it means “we do not have a permanent habitat”. Katutura is one of those poorest areas and also a place where I spent most of my time. The same day I arrived they announced a Cholera outbreak. Few months before there was also a Hepatitis E outbreak. In Katutura also lies the best community market where they sell the famous Kapana meat. Kapana is small pieces of beef chopped right next to the grill place. You can try the food before buying it. In front of every grill, there is a box of Ovambo spice (spicy and salty) where you can dip your beef. I cannot describe the taste, but it’s one of the best street foods I’ve ever tried in my life. Somehow you can taste it that these people have a tremendous experience in beef production and preparation. If you decide to buy they put your meat in a newspaper and you’re good to go. At the market, you can also get fat cakes, salads, all kind of spices and worms. To be honest, I didn’t try worms there, but on another occasion, I tried a sausage made out of beef and worms, and it was delicious. As I found out, they use worms to preserve the meat.

P.A.Y stands for Physically Active Youth and represents an after-school program for kids from rural areas. The program provides additional education in maths, science, IT and any languages. Besides that, a sport is part of the program, so kids can play football or ride bicycles. There is also a feeding program for learners, so people are working for P.A.Y. also cook every day. Every kid attending the programme is provided with lunch before and a snack after the classes. During the recent years, P.A.Y. attendees showed improvements in all the fields mentioned above. Especially in maths. Learners from P.A.Y. have a higher chance of getting into universities while programming group also participate in local competitions and they are doing excellent. Beyond technological and science, plan of the program is to shape the mindset of learners so they can be better persons and take responsibility for their actions, so it’s not uncommon for previous learners to become mentors.

I worked a lot with the group called “Coding guys”. Most of the participants are in their early 20s and on their way to graduating. We worked on improving their problem-solving skills and managed to attack the process of creating a software product. Even though ten days is not enough, I believe that we all learned something valuable.

We all have agreed to continue working online and try to improve our knowledge together via Skype sessions. Learning is an ongoing process, and I hope that for the future we will shape a framework which can be used for future mentors and learners as well.
To sum everything up, visiting Namibia and meeting awesome people there was one of the best life experiences I’ve ever had and I’m looking forward to going back there again.